“Media can instigate change, but media cannot topple governments. People topple governments,” remarks Dr. Mohammed el-Nawawy to a standing-room-only crowd that gathered to discuss the precarious situation in Egypt, a country el-Nawawy calls “the heart and center of the Arab world.” 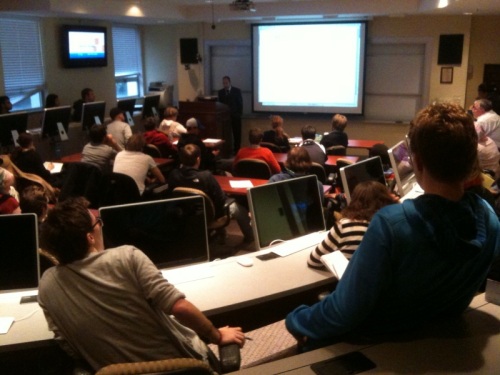 Dr. el-Nawawy, Associate Professor of Communication, is a native of Egypt and an expert in Middle East Media. The forum — titled “When Egypt Went Dark: The Silencing of the Internet” and sponsored by the Knight School of Communication — brought together students, faculty, staff, and community members to discuss the precarious situation in Egypt.

According to el-Nawawy, over 160,000 political bloggers write about the Egyptian government. These bloggers, some of whom are national celebrities, are no longer sitting behind their computers, but are now on the streets serving as activists for the Egyptian people. He believes the tipping point for the government’s shutdown of the Internet was the work of social media as an organizing tool for people on the streets of Egypt.

“If history is going to be written in Egypt, it is the Egyptian people, not the US, who will have to initiate the change,” he says. Social outbursts like this one, he says, are the result of feelings of helplessness among people seeking change.

Participants asked questions about the Muslim brotherhood (the strongest opposition group in Egypt’s government), the relationship between Israel and Palestine, and the shutdown’s impact on Internet-based business practices in Egypt. Others wanted to know about the current demands of the Egyptian people.

Some attendees voiced concern about the possibility for similar uprisings in the Middle East and Northern Africa. Others questioned the motivations of U.S. lawmakers who support an Internet kill-switch bill for the Internet in America.

el-Nawawy suggested that those wanting more information should turn to al-Jazeera English and invited attendees to promote the dissemination of al-Jazeera English in America through political activism and requests to local cable providers. “Americans should exercise their right to have access to information from multiple sources,” he says.