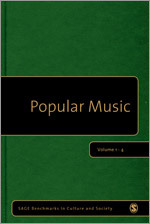 “Digital Subculture: A geek meaning of style” was selected as a chapter for the Sage Benchmarks in Culture and Society reference text, Popular Music.

The research article — originally published in the Journal of Communication Inquiry — was an argument that subcultures could gather in digital spaces the same way that they convened in coffee houses and concert venues.

I am honored to be included in this text, and to have my study heralded by the publisher among “the best that has been thought and published in the academic study of popular music.”

Here’s the description of the reference guide from the Sage website:

This collection focuses on social science perspectives on popular music since the late 1970s when the drift away from Musicology started. The latter focuses upon music as a sequence of notes and silence, rather than the social, economic, cultural and political contexts in which popular music is produced, exchanged and consumed. Since the 1970s, social scientists like Simon Frith, Larry Grossberg, Will Straw, Paul Willis, Andy Bennett, Keith Negus, Howard Becker and Sarah Thornton have intensively examined the phenomenon of popular music from a social science and cultural studies perspective. This is part of the same move in the social and cultural sciences that has magnified Visual Culture, Celebrity Culture, Television Studies, Film Studies, Media & Communication, Fashion, and much else besides as legitimate subjects for academic enquiry. This move has become known as ‘the Cultural Turn’.

This collection launches from the Cultural Turn, but it will also incorporate key articles from the early social science of pop music. The aim will be to provide researchers and libraries with a four volume distillation of the best that has been thought and published in the academic study of popular music.

Volume One: History and Theoretical Traditions provides the historical and theoretical anchor for the remainder of the set.

Volume Two: Mode of Production brings together material that relates the production of popular music to technology, production, distribution and consumption, amongst others.

Volume Three: Institutions of Popular Music examines the academic literature on the main social and ‘cultural intermediaries’ of popular music such as impression managers, new systems of music promotion and informal politics.