To get my head in the game for this week’s Media Learning Seminar in Miami, I went to a community space just outside the conference hotel. 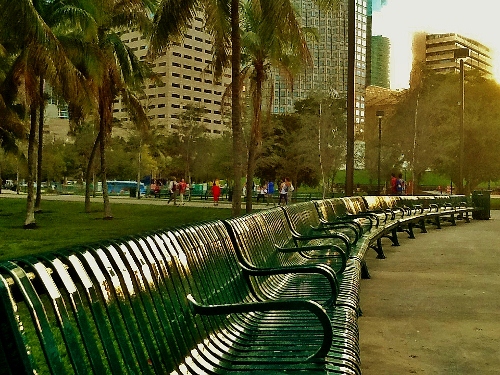 Bayfront Park was bustling with families, couples, people exercising, kids on bikes, and groups of teens showing off for each other. As an onlooker, I watched the people, picking up on conversations – well, the ones that were in English anyway (I’m getting the impression that everyone in Miami is bilingual or better).

I sat by a father, teaching his son and daughter to ride their bikes. As the father alternated between English and Spanish, his two kids imagined what they might experience as bike riders. They postulated about what the future might hold for them in their new world. Their bikes would make them increasingly mobile, able to stray further from home.

Isn’t that the world we all live in?

I sat, typing on my iPad, at once connected to my work in Charlotte, but undeniably on the move. Mobile.

The John S. and James L. Knight Foundation, sponsor of the Media Learning Seminar, works to create informed and engaged communities. As I sat in the park in the foundation’s own backyard, I was interested in the James L. Knight Theater – just two blocks away at the Miami Convention Center – and what it might mean to this community; how it might promote learning here.

But even more, I am interested in creating community in a world that is mobile – harnessing the mobile to help us invest in the local. This is the true work that the people attending this conference will aim to do. Each will learn and take information back to communities across the nation, attempting to inspire the local community to become more informed and more engaged.

I hope you’ll enjoy following along with me over the next two days as I learn and share with my colleagues here in Miami and in their networks across the nation.

The John S. and James L. Knight Foundation’s 2012 Media Learning Seminar in Miami Florida brought together leaders of community foundations, media professionals, technology entrepreneurs, researchers, educators, and foundation staff in the foundation’s quest for informed and engaged communities. I attended as a representative of the James L. Knight School of Communication at Queens University of Charlotte, a grantee of Knight Foundation. Read my articles on the conference here.