It’s described by some as a whimsical Dr. Seuss floral and by others as an industrial mash-up in metal.

In May 2012, the statue was installed on the banks of the Reedy River in downtown Greenville (SC) to mixed reviews. Whereas many residents enjoyed the addition of public art to the pedestrian bridge, some onlookers thought that it was a temporary installation for Artisphere, the annual (and nationally-ranked) arts festival held in the city. The festival has a history of decorating the steel-and-wood pedestrian bridge which is visible from the Gower bridge that allows Main Street  to span the river.

The Paradigm Pathway is a permanent addition to Greenville’s public art collection. 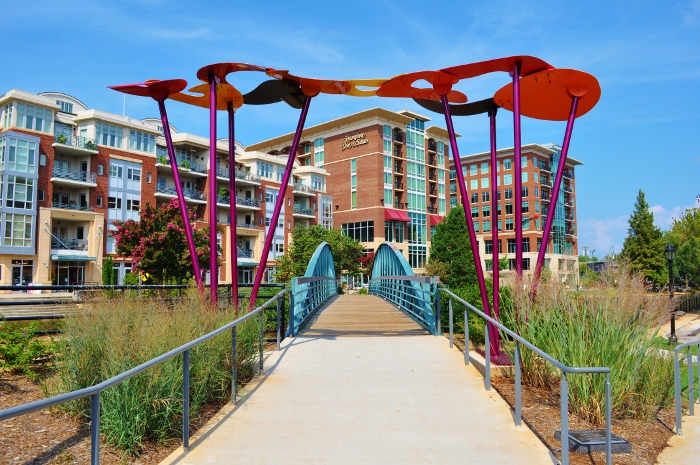 The Paradigm Pathway brightens the banks of the Reedy River
in downtown Greenville’s (SC)  RiverPlace.
The Stephen Kischel statue was dedicated in May 2012 during Artisphere,
Greenville’s annual (and nationally-ranked) arts festival.

The addition of the colorful archway to the pedestrian bridge gives the bridge a sense of place. The bridge is located between the Peace Center for the Performing Arts and the RiverPlace development, a mixed-use space both residential and commercial. It also provides access to the city’s Swamp Rabbit trail which runs alongside the Reedy River.

The bridge’s function is to provide pedestrians access to cross the river, which sits one-story below street level at this location. Although stairs to the street level flank both sides of the bridge, this bridge permits walkers (and bikers) to cross without moving up to the street above.

During my time near the archway, I noticed walkers interacting with it in several ways: 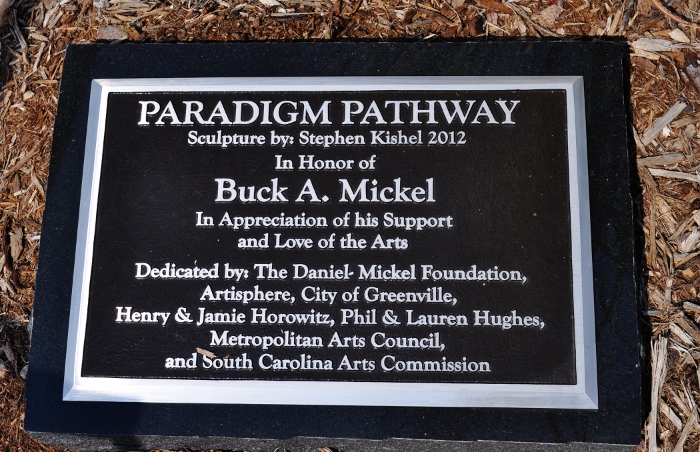 An archway has the surprising effect of serving as (1) an object of interest, (2) a place to be, and (3) a window to the world outside it.

An object of interest
The Paradigm Pathway is interesting in its own right. The purple, orange, and yellow tones stand in sharp contrast to the swaths of green grass, brownish river, red bricks, and gray stone that surround it. This is what gives it that “Dr. Suess” feeling, but also what causes it to be noticeable from above and below.

A place to be
The addition of the scultpture provides visual interest for this area, but it also calls to passers-by to come to it. At the street level, passers-by can see the sculpture from above. Perhaps they see it and decide that the bridge looks like a fun place to be, to walk, to experience. At the river level, pedestrians on the opposite bank see it and want to cross the bridge, leading them to discover new sights and new paths.

A window to its surroundings
Standing in the archway, the arch creates a frame for the riverplace development, as pictured above, capturing residents, restaurants, art studios, and a hotel. Pausing inside the arch might allow you to look onto the waters of the river below, across the bridge to the buildings ahead, and even to physically turn around and see the streetscape behind. An open-air venue next to the bridge, a former mill, is a brick monument full od arched windows, and the paradigm pathway echoes this shape.

While these surroundings my have not gone unnoticed in the past, the archway gives an oppoortunity to stop, creating a destination where only a route existed before.