Unexpected Use for iPad — Jumbotron 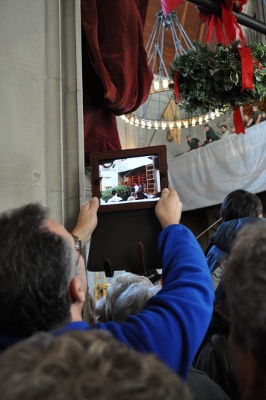 I stumbled across a new use for the iPad – one I didn’t expect.

The Biltmore Estate, well-known for its Christmas decorations and Candlelight evenings, has to decorate the house in preparation for the season. On Wednesday, November 2, 2011, the estate invited people to watch the installation of the 35-foot Christmas Tree in the Banquet Hall. One of the added perks is that for one-hour, onlookers and local media can watch, participate in, and document the decorating process.

After the tree made its way into the house, we lucked out being on the right side of the Banquet Hall in the Wintergarden to have a clear view of the tree being raised.

As the crowd shuffled around, a stranger next to me, Brian, decided to get a photo with the iPad he purchased the week prior.

As he raised his iPad above his head, the crowd behind us cheered. They didn’t have the line-of-sight into the banquet hall, but they could see the event on Brian’s screen. The cheering continued as the make-shift Jumbotron documented the tree-raising and allowed the crowd to witness the event first-hand.

As Brian flipped from the rear camera to the front camera, folks in the crowd behind us saw themselves on the screen.They laughed, cheered, and waved. Clearly, the iPad 2’s dual cameras are a crowd-pleaser.

Event planners, take note. iPads can be used to extend a view, to allow a crowd without line-of-sight to engage in an event. The age of the personal jumbotron begins.

What other unexpected uses have you discovered for the iPad?