Even though these findings may come as no surprise to educators who already use Twitter, our study (described below) suggests that students who are active on Twitter alongside their instructors may actually perceive their instructors to be more approachable and interactive than they would otherwise. Thus, the study suggests that Twitter may be a viable avenue for  supplementing teacher-student interaction in the classroom. 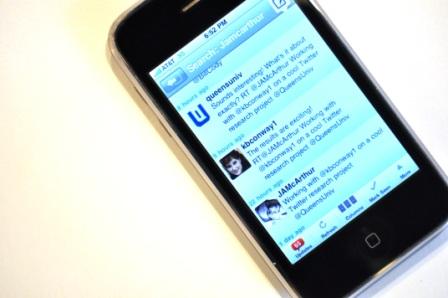 The following story was originally published on the Queens University of Charlotte website, September 2010, and is reprinted here.

A study in the School of Communication at Queens University of Charlotte aims to uncover whether Twitter and other social media channels can elevate teaching by increasing student engagement.

Study authors – Assistant Professor Dr. John McArthur  and Kristen Bostedo-Conway , a graduate student in the Master of Arts in Organizational and Strategic Communication program – are collecting data from classes at Queens.

“Faculty members at universities nationwide are grappling with issues of whether to invest time and energy into social media initiatives,” McArthur says. “This study seeks to begin a conversation about social media’s ability to influence the quality of relationships between professors and students.”

Bostedo-Conway says the question is not whether professors and students should use Twitter, but rather how Twitter can be used to enhance the classroom environment and contribute to learning.

Early findings indicate that a positive relationship exists between reading an instructor’s tweets (short messages posted via Twitter) and positive perceptions of that instructor’s abilities and engagement in the classroom.

The study so far suggests that students who are active on Twitter and follow their instructors may perceive them to be more knowledgeable, approachable and interactive than they would otherwise. Thus, the study suggests that Twitter may be a viable avenue for improving teacher-student relationships and communication.

McArthur and Bostedo-Conway are preparing their work for publication and are excited to complete their research.

McArthur is a teacher, learner and researcher of user-experience design, proxemics (the communicativity of space), and the role of technology and media design in society. He is director of undergraduate programs in the School of Communication where he teaches a variety of courses including Integrated Strategic Communication, Layout and Design, Media Aesthetics, and courses in media, technology and society.