The article below was featured on the Social Media Club’s Education Blog on September 17, 2012.

I embarked on another classroom teaching and learning experiment this fall on Pinterest. One hundred of our students at Queens University of Charlotte were dispatched into the venues and streets of Charlotte as student interns and volunteers during the 2012 Democratic National Convention.

The Knight School of Communication held a two-day learning conference before the convention, and then placed students with opportunities of all kinds. We had students on the podium committee at the convention, working with the foreign media press gallery, working in production for national broadcasts like ABC World News with Diane Sawyer and The Daily Show with Jon Stewart, supporting local media outlets, and serving as hosts for the PPL, a venue dedicated to culture, arts, learning, and media both credentialed and not. 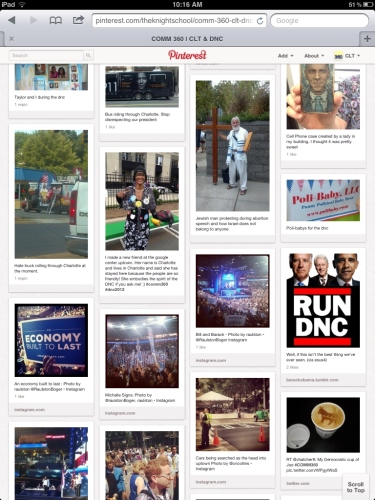 As one of the assignments of the course, each student was asked to chronicle his or her experience on Pinterest. Here are a couple of things we learned at the onset of our experiment:

Open Access
When we planned this assignment, Pinterest was an invitation-only service. We devised a plan to invite all of our class members, but, luckily for us, Pinterest moved to open access two weeks before our class. Each students was able to create a Pinterest account during the class and begin posting.

Real time posting
Pinterest isn’t really built for real-time posting. The mobile apps do not yet interface well with Twitter or Facebook, or services like Hootsuite that allow multiple posting at once. Many of our students privileged Twitter for current posts, choosing to then post their images to Pinterest at a later time when they were at their computers. Using the service myself, I found that posting a picture to Twitter was the easiest way to get it online from my iPad or iPhone. Then, I would move through Pinterest to pin my image by searching for it on the web. Pinterest could make this a lot more usable by allowing direct posting from its mobile apps.

Online Archive
Pinterest makes an excellent online archive. It is easy to navigate, shows all the images, and tracks where they came from online and who pinned wach image. It is a site built for compilation, and it works well.

Group Function
Over 100 people had access to post to our single Pinterest board. Despite the fact that Pinterest emailed every user every time any other user posted on the board, the service worked beautifully to combine all of these disparate voices on one page. This was the piece that gave me the largest amount of advance worry, not having seen or tried a board with a hundred pinners.

These are just some early observations. We plan to write an article about the experiment, detailing the plan, the assignment, and the results. It’s been a fun ride.

John A. McArthur, PhD, is an assistant professor and director of undergraduate programs in the James L. Knight School of Communication at Queens University of Charlotte (NC). Connect with Dr. McArthur at http://www.jamcarthur.com or on Twitter @JAMcArthur.